CISQ is now the Consortium for Information & Software Quality. The consortium decided to change its name to reflect the growing importance of software in business and critical infrastructure and the increasing role of information in commerce and government. This change coincides with CISQ’s updating of its quality measurement standards to include weaknesses affecting embedded software. Read more →

Could A New ISO Standard and Old Foe Solve the Gordian Knot of Agile/DevOps Sizing and Estimation?

David Norton, Executive Director, CISQ Note: This blog first appeared on Dave's LinkedIn on May 16, 2019 in a longer, more wittier form The following comes with a warning! I am about to suggest something that many in the agile world will hate. Even as I type, I can already... Read more →

Tracie Berardi, Program Manager, CISQ On May 1 in Washington, DC, CISQ presented at Cyber Standards for Modern IT, an event co-hosted with the Homeland Security Dialogue Forum and Center for Public Policy Innovation. The purpose of the meeting was to educate members of Congress and their staff on standards... Read more →

Dr. Bill Curtis, Founding Executive Director of the Consortium for IT Software Quality (CISQ), has joined the Standards Technical Panels (STPs) for the UL 2900 series of standards. UL 2900 is a set of software cybersecurity standards for network-connectable products. Read more →

CISQ's week at OMG and a standard proposal

After requests from numerous commercial enterprises, the Consortium for IT Software Quality (CISQ) was formed in 2010 by the Software Engineering Institute at Carnegie Mellon University and the Object Management Group (OMG), an international IT standards organization. CISQ was chartered to create international standards for automating the measurement of size and structural quality from software source code. During early executive forums held in Washington DC, Frankfurt, and Bangalore, five measures were selected for initial specification, among which was a request to automate the counting of Function Points from source code based as closely as possible on counting guidelines from the International Function Points User Group (IFPUG). Read more →

The NIST Cybersecurity Framework was first published in 2014 for operators of U.S. critical infrastructure and is now the de facto cybersecurity framework for a wide range of businesses and organizations across industries. Organizations link their cyber approaches to the Framework’s core functions of Identify, Protect, Detect, Respond and Recover... Read more →

CISQ announces new study: The Cost of Poor Software Quality in the US: A 2018 Report 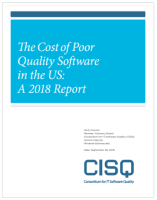 This report was written by Herb Krasner, a member of CISQ’s Advisory Board. Herb spent many years at the University of Texas at Austin as Professor of Software Engineering, the Director of Outreach Services for the UT Center for Advanced Research in Software Engineering (ARiSE), and founder and CTO of... Read more →

Cybersecurity training and workforce development is a common theme and solution that’s proposed at conferences that discuss the challenges of cybersecurity and the future as we know it – developing, architecting and living within digital IT ecosystems. Who’s steering the ship? Do leaders understand the security threats and do their... Read more →